In the early hours of today (3.00 a.m. Sunday 5th September) a Blackpool Police Officer was head-butted and another two Police Officers were spat at by a 24-year-old man after telling them he had HIV.

The three officers were on Operation Night Safe Duty, patrolling the town centre to support the resort’s night-time economy when they approached the man in Queen Street (featured photograph) in relation to a public order offence. The man told the Officers he had HIV before spitting at two of them, and then head-butting the third.

Lancashire Police’s Force Incident Manager explained, ‘The two officers were then threatened by the offender who stated he had HIV, before he head-butted another.’

The man fled the scene, but was caught on CCTV heading towards the Promenade. He was then found near The Cenotaph, where he violently resisted arrest. Police say the man is currently remaining in custody.

Fortunately, the head-butted officer did not require treatment in hospital, and all three officers remain on duty. 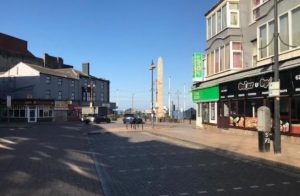 Lytham St.Anne’s Resident Almost Fooled Into Parting With Over £5,000 for McDonald’s Mayfair!

Lytham St.Anne’s Resident Almost Fooled Into Parting With Over £5,000 for McDonald’s Mayfair!