An exhibition sharing a bespoke model of the controversial new £360,000 Fairhaven Ice Cream Kiosk will be hosted next week to give the public the opportunity to view the striking and provocative design for the landmark building.

Taking inspiration from the natural environment, the development aims create a new building that is not only contemporary, but also creating a sense of intrigue, encouraging passers-by to visit the building.

On Thursday 24 and Friday 25 February, as well as the morning of Saturday 26 February, in the Mawson Room at Fairhaven Lake, a bespoke scale model of the proposed design will be available for inspection. Should members of the public have any questions or opinions, representatives of the controversial project will be on hand to receive them between 11 a.m. – 1 p.m. on the Thursday and Friday, and 10 a.m. – Noon on the Saturday.

Fylde Council invites anyone who wishes to comment or feedback on the proposals to attend the exhibition and see the design in person.

Since 1965, the small kiosk at the entrance to the Stanner Bank Car Park (pictured below) has served ice cream and refreshments to generations of residents and visitors. When work began to upgrade the Fairhaven sea defences in 2017, discussions took place between the tenants and the Council over how the existing kiosk would be affected by the raising of the car park.

A series of initial designs produced by Creative SPARC Architects, working on behalf of the tenants, were iterated into the current proposal, intended to evoke the form of the birds for whom the estuary and Fairhaven Lake are a migratory destination. The structure would sit on the grass area opposite the current kiosk site, to better accommodate the new car park entrance, and would incorporate a fully enclosable covered 25-seat terrace usable throughout the year providing a view over the estuary.

Councillor Michael Sayward, Chair of the Tourism and Leisure Committee, said: ‘With the Fairhaven sea defence work complete, we have a perfect opportunity to revisit the refreshment offering at Stanner Bank. The architects have produced a striking proposal which would act as landmark in its own right, and as a beautiful capstone to the coastal regeneration works. I would encourage anyone with an interest in the future of the kiosk to visit the exhibition and view the striking design for themselves.’

The proposal went to full Council on 5 July 2021, and it was resolved to approve the fully funded scheme to the Council’s Capital Programme to the sum of £360,000. 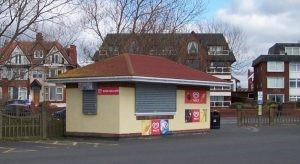