It’s been a busy few weeks at the Ansdell Institute, the Grade II-listed building on Woodlands Road. An inaugural meeting of the Friends of Ansell Institute was held last week  and attracted nearly thirty people. A committee was appointed and the goals for the group (see the featured photograph) agreed.

A new venture opened on 1st July sees a lovely area (pictured below) designated to the selling of a wide selection of teas, coffees and soft drinks together with a delicious range of delicacies to nibble on. If you prefer something a little stronger there is also a selection of wines, prosecco and assorted gins on offer. The opening hours are Monday to Saturday 10am-6pm to begin with. There is also seating available outdoors if you wish to soak up the Summer sunshine. It is open to the public and no membership required. 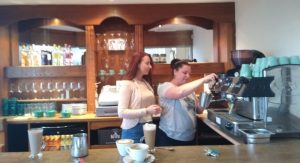 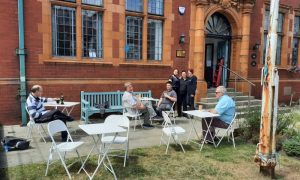 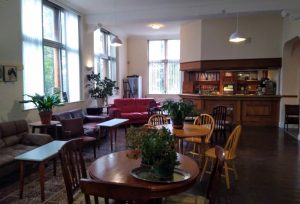 And the Institute is now home to a range of other business. The Vintage Sewing Bunny operates from the lower ground floor, Rarity School of Dance is on the top floor with hundreds of children attending classes, and the Institute is also home to children’s clothing firm Belle and the Beanstalk. Slimming World is also holding sessions in the historic building.

Councillor Ben Aitken  of Ansdell Ward, said, ‘We now have an officially-formed group to support this building and decide on how best to use it and improve it. We need to raise funds quickly, to prevent the further deterioration of the building. Over the years the roof has failed, and water ingress has caused damage throughout the building which, if not repaired, will cause further deterioration and put the building at real risk. The Secretary of the Social Club in the building, Alan Roe, has worked wonders, taking on the role of secretary of the entire building. He’s brought in new businesses to give the building an income, and it is rapidly becoming the heart of Ansdell once again.’

Ansdell Councillor Richard Redcliffe, also an Ansdell councillor, explained: ‘This building was built in 1909 to further the education and cultural development of Ansdell’s residents, with a reading room, classrooms and billiard rooms. There is no building like it on the Fylde coast – it must be saved. Over the years it became a social club and large areas of the building fell into disuse, and there is some wonderful architecture hidden away. We want to put that right and it is clear there is a lot of interest in using the building for the good of the community.’ 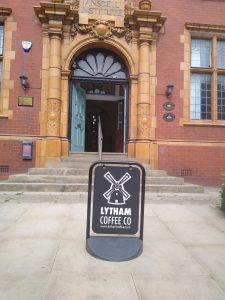 A Cherry Blossom Battering May Day In Store For Lytham St. Anne’s