Boris Johnson visited BAE Systems’ ‘Factory of the Future’ project at the Warton base yesterday. The Prime Minister said that £6.6bn was being spent on research and development as part of the Tempest future combat air system.

Built around a fighter bomber jet that can be flown without a pilot in the cockpit, Tempest is due to come into service in 2035 – just as the current generation of Typhoon aircraft are phased out.

Mr. Johnson said the programme will create 46,000 jobs, ‘many of them in Lancashire’. He added, ‘We’re taking some tough decisions and expensive decisions. We have got to modernise our armed forces and that means investing in twenty-first century technology – we can’t just keep the same old kit, we have to take a hyper-leap forward.  That means you have got to have stuff that is AI-capable, capable of being unmanned if necessary, and all sorts of stuff that we are doing now that will enable us to fight the wars of the future.’

Fylde MP Mark Menzies, who was a Warton to greet the PM said, ‘It was brilliant to welcome the Prime Minister to BAE Systems at Warton this morning (22.03.2021) , offering the opportunity to showcase the Team Tempest project, which maintains Fylde’s position at the heart of UK defence capability.’ 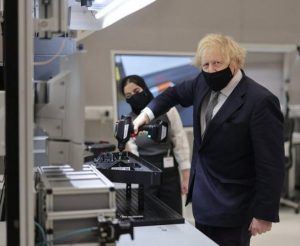 Do you know who these alleged vandals are?

Could this be the alternative to fireworks that Lytham locals have been begging for?!

March 1st – Is It Now Spring In Lytham St. Anne’s?