A Blackpool Victoria Hospital nurse and Labour Councillor has been publically ‘fat-shamed’ by Blackpool South MP Scott Benton on Twitter in the continuing gambling gifts row highlighted in Lytham St. Anne’s News yesterday.  This follows criticism of the Tory MP accepting lavish sporting gifts from the betting industry as he expressed explicit support for gambling.

NHS Nurse David Colldash was accused of having ‘more than one free pasty by the looks of it’ in a response from the Tory Blackpool South MP.  His fat shaming Tweet has received widespread criticism, eemplified by David Boon’s response centred on MP Benton, ‘The man with a plan. What better way of transforming dead on their feet town centres, poor/deprived areas than by opening more betting shops. Getting the poorest to gamble our way to prosperity.’

Ironically, MP Benton is Co-Chair of the All Parliamentary Group on Eating Disorders.

The Tweets are depicted below. 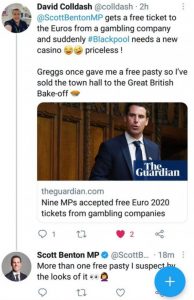 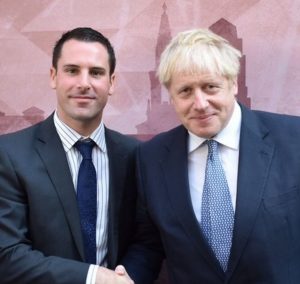 Exciting Times Ahead For The Historic Ansdell Institute

Have you seen this lad?