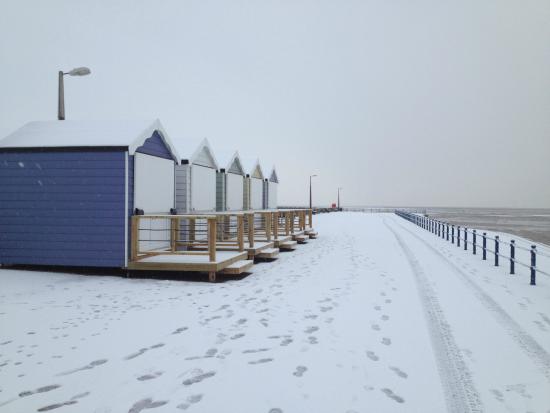 Get the Sledges Ready! More Snow is Coming!

Wintry conditions will continue this week across Scotland, and northern England before the cold air pushes across the whole of the UK.

Snow and ice have already caused disruption this week closing some transport routes etc. National Severe Weather warnings have been issued throughout the coming week.

This could be good news for the snow lovers in Lytham St Annes, many who voiced their disappointment with the light dusting the resort got this morning. (02/02/2021)

Cold air from Scandinavia is sitting across the north of the UK for much of this week, while to the Southwest warm, moist air is pushing in from the Atlantic. Where these two air masses meet rain turns to snow.

Met Office Chief Meteorologist, Frank Saunders, said: “Further spells of snow will continue to affect parts of northern England and Scotland during Wednesday and Thursday. There could be continued travel disruption across northern trans-Pennine routes and the higher roads across the Southern Uplands and Grampians.

“Meanwhile, a period of heavy rain overnight into early Wednesday will result in rapid thawing of snow in places, particularly north east England, which may lead to a risk of flooding.”

Later this week week a low-pressure system, which is slowly crossing the country, pulls away to the south east allowing cold air to cross the country from the eastern continent.

Met Office Deputy Chief Meteorologist, Mark Sidaway, said: “Into the weekend snow will continue across much of Scotland, and is likely to increasingly fall to low levels before beginning to move south into northern and eastern England.”

“We are likely to see some very large accumulations across higher parts of Scotland especially, with strong winds leading to significant drifting and blizzard conditions at times.”

“Although amounts of snow across England are likely to be less, they could still cause some problems as we go into the weekend.”

Next week will stay chilly for much of the UK with brisk easterly winds making it feel even colder. However, the weather is potentially drier than this week. The Met Offices 6-30 day forecast currently points to the likelihood of cold conditions continuing into mid-February.