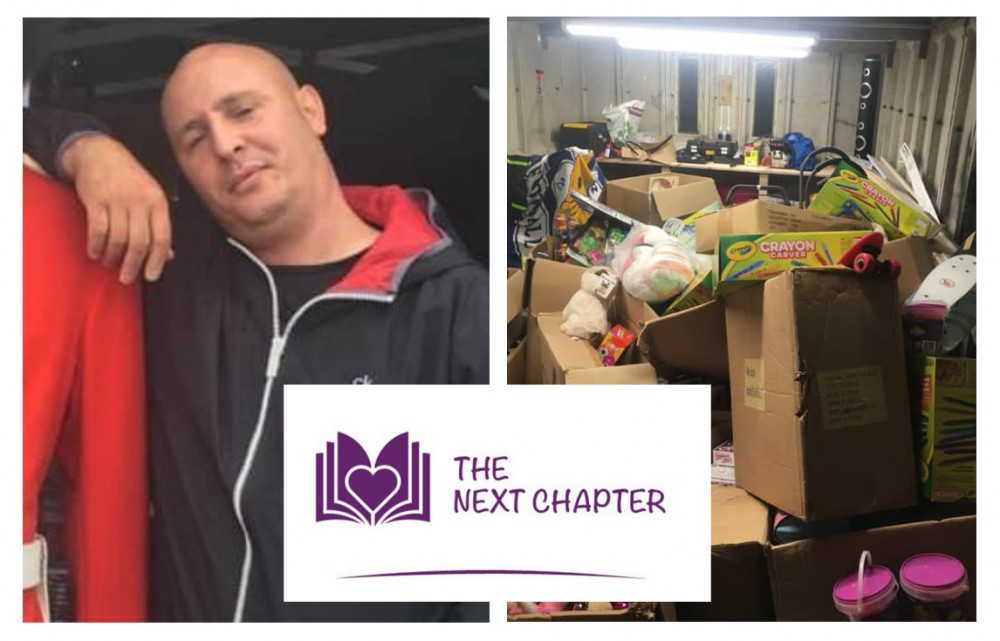 Tony Wilson, locals may know him as the admin of Facebook group The Only Way Is St Anne’s, and the owner of Van 4 U removals, has shown his heart of gold this year.

He has shared his ventures with us, in which he has grouped up with a number of local people, and businesses, to raise money for charities and help those in need.

We contacted Tony to get the full story and he has explained his journey over the last 4 years to help the community. With the help of local businesses and the community, Tony has brought joy to many of those who have suffered in silence.

This Christmas Tony and his pal Ryan Smith filled his van full of toys from Smyth’s Toy Superstore donated by local business owners Martin Hudson & Spencer Brown. They posted in different groups asking local people, who were struggling financially this winter, to leave a message in their inbox discreetly. They then spent 5 hours of their spare time delivering the toys and presents around the local area, with over 100 children benefiting in total including some in hostels.

Tony told Lytham St Annes News: “Some people were brought to tears because they literally have nothing, and they were really grateful for what we were doing, telling us how we had made their kids Christmas”

He continued.. “It all started for me 4/5 years ago. I was driving down the prom and saw a guy sleeping rough on the streets. It was January and so cold outside. So, I put myself in his position and really thought about how it would be if I myself, or just how anyone, was to get into that situation. So, I bought him a coffee and sat with him for a while and we had a chat.

“Since then, after listening to some of the stories, I was really interested to hear how some of these people had ended up in such terrible circumstances.

“Then I got involved with the running of a local soup kitchen (The Next Chapter Soup Kitchen) where the actual need for something more permanent became very apparent. So, every Wednesday the volunteers would cook the food and take it to the church where 30-50 people would arrive at 6:30. These people were homeless, some mentally ill, some very vulnerable, lonely, or deprived. They would come for a hot meal and a chat and would look forward to it all week. Sometimes we were the only people they spoke to, they could socialise and feel less isolated.

The soup kitchen supporting the vulnerable and homeless ❤
“We would get donations of clothes, shoes even sanitary products toothpaste, shampoos etc.. these would then be handed out, usually by Ava and the volunteers. We also had barbers come and cut hair and we played music too. The food donations we received were bagged up and handed out in food parcels as even food banks are struggling with the pressure.

“We had lots of volunteers who would come every week from all over the Fylde with pans of cooked food and offer their time even just to wash dishes and serve the meals. We even had a couple of children do their duke of Edinburgh award with us.

“We have done Christmas dinner with all the trimmings for the last 2 years, all cooked by volunteers, but this year due to covid restrictions we are struggling. There’s a long list of different businesses that have helped locally along the way including: Lytham hall café, the Beach Café, Zumba Suzy and her dancers all donating food and other goods. As well as lots of kind individuals, far too many to mention.”

Another soup kitchen called Amazing Graze do a fabulous job in Blackpool, supporting the homeless and vulnerable as well as Tracy Byrne and Janet Poyner with their outreach charity Helping Hearts. Also, it would be a crime not to mention Bill Hodgson from Kirkham who has raised a huge amount of money in his last 2 fundraising events; flipping a 28 stone tyre for 24 hours, and the recent Santa slog in which he pulled Santa and his sleigh from Fleetwood to Kirkham !

Tony’s family has also been helping with his charitable giving. His wife, Becky, cooking each week and his 11 year old daughter, Ava, who was awarded the kindness award at her school for volunteering every Wednesday.

Ava also goes out on the streets with Tony and the volunteers handing out food and clothing. Tony said, “I came from a very rough area in Manchester growing up so I understand what it’s like to be less well off and I think it is good for children to see what happens. It really teaches them to appreciate what they’ve got and not to take things for granted. Ava will treat the homeless just like she would treat anyone else and whenever we see someone in need she always asks to buy them some food and take it to them.”

Ansdell school, which Ava left last year, also chose The Next Chapter Soup Kitchen for the donations for last years harvest festival. The generosity was overwhelming.

Home-start and social services (children services) contacted Tony yesterday to ask for toys because there has been a recent lack of donations. The social workers are being asked for toys and gifts for some of their cases. So, the team delivered to the front desk of the social services on Tuesday, with another trip planned before Christmas if they can get more Toys.

Tony added: “A massive thanks has to go to Ryan Smith (aka big Ryan) who is an amazing fundraiser and does lots of charity work including organising different events with celebrity friends and even sleeping rough himself to raise awareness.

“Not forgetting the local promenade dancing man Peter D rock, who has been to the soup kitchen many times bringing his happiness and dancing with him!

Tony added: “I hope that articles like this can help to raise some awareness of such a huge problem in society that we sometimes choose to forget about or ignore.”

This year has been especially hard on everyone and more people need help than ever before. To make a donation of toys (must be NEW toys due to covid) please contact Tony on his Facebook Page below or.. call in to VAN 4 U HQ at 149-151 St Albans Rd, Lytham St Annes, FY8 1UY. https://www.facebook.com/Van-4-U-HQ-and-Showroom-109056174005845/