A Sunday evening emergency call saw HM Lytham’s Coastguard volunteers rush to the Blackpool coastline to rescue a person who was allegedly clinging on to the North Pier’s legs as the tide was flooding in. The emergency call, however, turned out to be a hoax.

It was at 7.08 p.m. yesterday evening when both Lytham and Fleetwood’s Coastguard volunteers were immediately tasked to the purported incident. At the scene, two rescue officers in dry suits made their way under the North Pier’s  legs to investigate and search.

With the tide incoming, RNLI Blackpool also launched one of its D-class lifeboat to search the end of the Pier, but the team did not find anyone in need of their help.

Following discussions with the MRC (Maritime Rescue Centre) at Holyhead in Wales, it was decided the report was a hoax call and both Coastguard teams and Lifeboat crews were stood down.

A spokesperson for HM Coastguard Lytham explained: ‘We were called out at 19.08 on Sunday 5th September to reports of a person possibly in the rafters of North Pier. Ourselves and HM Coastguard Fleetwood arrived on scene and immediately started a search of the area, CRO’s deployed onto the beach searching the length of the Pier, however with the flooding tide, we were unable to search the end of the pier, two officers donned water rescue gear and entered the water to search, however with the tide quickly flooding we were still unable to reach the end of the pier, so we requested the assistance of RNLI Blackpool, they launched one lifeboat and thoroughly searched where we couldn’t access. No cause for concern was found and with Holyhead MRCC content, all units were stood down and returned to their respective stations.’

A spokesperson for HM Fleetwood Coastguard said; ‘This was considered a ‘Hoax Call’, and added, ‘It was our second hoax call this weekend.’ 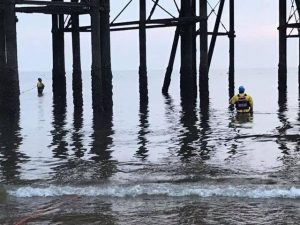 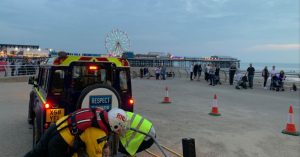 Santa will still be doing his road trip around Lytham and St.Anne’s 🎅