A parent of a Year Six child at a local Primary School has contacted Lytham St. Annes News to share her deep concern (and anger) about the double standards that are currently so explicitly being shown by the Government.

She says that whilst up to 2500 VIPs will be invited by the UEFA to attend the final matches of Euro 2020 at Wembley, she can’t see her son take part in his school’s Sports Day (to be held tomorrow morning).

The 2500 VIPs will be exempt from self-isolation rules when they arrive in the UK for the semi finals and finals of the Euro competition. The Government has reached a compromise deal to effectively put UEFA officials, politicians, sponsors and broadcasters in ‘bubbles’ for both the semi-final and final matches that are to be played in London in from of 60,000 fans.

The angry parent says that, in complete contrast,  she will not be allowed to attend her child’s final Sports Day at St Thomas’ C of E Primary School tomorrow morning, as the Primary school has said in a letter, ‘because of the marked increase in people being tested positive for Covid, we will unfortunately not be inviting families and friends onto our sports field to watch or encourage the children.’

The parent stresses that she does not blame the school, who she holds in continued esteem for their care of her children, and are seemingly following guidelines – but she the Government, who are treating VIPs and football fans in a completely different way to the rest of the population.  Additionally, she says that as well as the many continuing restrictions at home, British travellers continue to face restrictions over taking holidays abroad.

The angry parent says, ‘First we had Dominic Cummings travelling to Barnard Castle, and PPE contracts being handed out without due diligence,  now we have 2,500 foreign VIPs who need not quarantine or isolate, tens of thousands of football fans converging in one place and VIPs mingling freely without masks at Carbis Bay, but we cannot see our children simply enjoying Sports and letting them see our support. There are definitely two sets of rules from this Tory Government.’

Culture Secretary Oliver Dowden said, ‘As we continue to make progress on our road map out of lockdown, keeping the public safe remains our top priority. We have worked extremely closely with UEFA and the FA to ensure rigorous and tight public health measures are in place whilst allowing more fans to see the action live. The finals promise to be an unforgettable moment in our national recovery from the pandemic.’

Earlier reports that suggested the final could be moved to Budapest if a deal could not be reached allegedly put the Government under immense pressure. Italian Prime Minister Mario Draghi also was quick to say that Rome would be pleased to provide an alternative venue.  Police have also been criticised for their response to the chaos caused by thousands of Scotland fans, who did not social distance or wear masks whilst in London, compared with their reaction to the Sarah Everard vigil held mainly by women (scenes pictured below to illustrate). 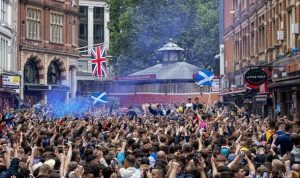 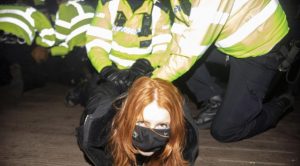 A hairy moment for Boris