It was ten years ago, in 2011, that the former Leader of the Council John Coombes first approached the Council with a proposal to create and install a permanent memorial in recognition of the local efforts made during World War 2. The preferred location was Fairhaven Lake. One year later, in 2012, a full-sized replica of a Mark VB Spitfire airplane memorial with landscaping and lighting was put in place.

A thorough assessment has been carried out by officers of the Council to consider the ongoing costs of upkeep for the memorial, with annual costs looking to be in the region of £2,000 per year. Therefore, a new agreement sets out that the Council will now take on ownership of the memorial at no cost, with the Council taking over management and maintenance of the memorial for a minimum period of 10 years.

Paul Walker, Director of Development Services at Fylde Council said: ‘The agreement by the Tourism and Leisure Committee to take on the ownership and future management and maintenance of the Spitfire Memorial secures its future for at least the next ten years. Fairhaven Lake provides a fitting backdrop to this popular and important attraction.’ 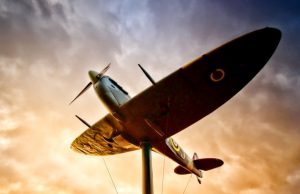 KFC in Blackpool town centre has closed its doors for good

Here’s How To Access Your Free Covid-19 Tests In Lytham St. Anne’s