Sadly, the beautiful cherry blossom will be falling like confetti in Lytham St. Anne’s as it receives a battering in the forecast heavy showers as the upcoming May Bank Holiday Weekend progresses.

From Friday 30th April to Sunday 2nd May the Met Office has shared this forecast for our area: ‘There will be sunny spells and scattered showers, which could be heavy with hail in a few places. Winds will be light, but will be rather cold by day; with chilly nights and occasional air frost.’

But by Bank Holiday Monday the entire country will be faced with a deluge of heavy rainfall, according to Met Office spokesman Oli Clayton who says, ‘From Monday an area of low pressure is approaching from the west. It’s bringing unsettled conditions with a period of wind and rain for many. Temperatures are likely to be colder than average overall, with chilly nights over the Bank Holiday weekend.’ 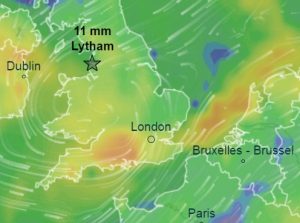