It may have been wintry outside, but as always there was a very warm welcome at the Lowther Pavilion on Friday for the much anticipated ‘An Audience with Stan Boardman.  There was almost a full house as the legendary Liverpool-born comedian once again faced the Lowther spotlight.  The opening fanfare of the 2006 ‘Stan’s World Cup Song’, also known as “Aye Aye Ippy The Germans Bombed Our Chippy” had the enthusiastic audience clapping along as Stan took to the stage to a resounding cheer.

For an opening twenty minutes Stan welcomed everyone – with a wealth of gags about the town and cities the audience had travelled from to be at the Lowther for this special night. He affectionately recollected how on a previous visit to the Theatre, Bobby Ball asked if he could introduce him and how they shared much valued time together on stage.  It was a great warn up for the support artiste of Bernie Flint, who likewise was the butt of Stan’s distinctive humour. The comradery between the two entertainers was obvious as they recalled the days of ‘Opportunity Knocks’ – Bernie holding the record for the highest number of consecutive wins with 12 appearances. Stan said they has to cancel the All-Winners Show as Bernie was the only winner that season! He also quipped that although he didn’t win – he achieved the highest score on Hughie Green’s clapometer!

The first half of the show then featured Bernie Flint.  I have seen the Southport based artiste many times – but this was his best performance ever.  The first-rate sound system in the Lowther truly projected his voice and excellent guitar picking. Interrupting his rendition of Simon & Garfunkel’s ‘The Boxer; with a well-timed and well-focused series of anecdotes, Bernie truly held the attention and appreciation of the audience.  Adding his own lyrics to classic songs such as Ralph McTell’s ‘Streets of London’ and even Oasis’ ‘Wonderwall’, Bernie was truly impressive.

After the interval it was the turn of the main-man, Stan Boardman.  Celebrating his 84th birthday next Tuesday, Stan shared lots of jokes and stories about growing old, visits to the hospital, going out for anniversary dinners and forgetting names – all were timely topics for Stan’s off-the- wall humour. He also told a few jokes which certainly would not be allowed on TV today, but were obviously appreciated by a non-woke audience.  An unexpected visit by Father Christmas had Stan in stitches! In between the stand-up Stan took the opportunity to share magical memories from yesteryear on the big Lowther screen – these included selected moments from Granada TVs ‘The Comedians’ and the famous Fokker interview from ‘The Des O’Connor Show’.

Stan, who received a standing ovation at the end of the show, obviously enjoyed returning to the Lowther – and the Lowther audience truly appreciated his reappearance at the first-rate Lytham venue.

Photographed below Stan with his daughter Andrea. 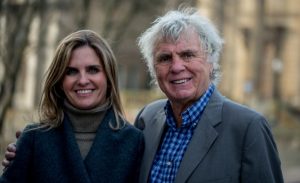 The Vaccine Van is back!

DO NOT APPROACH THIS MAN!

The Vaccine Van is back!