Blackpool South MP Scott Benton has today (Monday 17th October) posted a video on his Facebook page headlined by the message, ‘Another day in Brunswick, another day of out-of-control kids.’  In his message he criticises the middle-class do-gooders from outside of Blackpool for sharing their sociological woke nonsense on how to deal with these ‘yobs’ – and offers to take them from a walk around the area.

The Tory MP for Blackpool South says ‘Thanks to the dozens of you that have sent emails, messages and have phoned my office to share your stories of what is going on. I suspected, that 80% of ordinary folk would agree with me on this issue and this has definitely been the case. Since speaking about this in parliament last week, I’ve had the “great and good” contacting me. One middle class do-gooder from outside of Blackpool after another sharing their sociological woke nonsense on how to deal with these yobs.

According to them, it’s not the kids who are the problem but the attitudes I hold, and those held by the vast majority of ordinary people. I’ve offered to take them on a walk around the area to show them the reality, but nobody has taken me up on this yet…’

The vast majority of replies agree with Scott. Sue Barraclough commented, ‘It’s embarrassing if any of those where my kids, I would thrash them and make them clean up any mess and mostly they be apologising to everyone. I always knew where my boys were that is the trouble these days, parents don’t appear to know where and what their kids are doing.’

Kath Anthony thinks the youths should be named and shamed, , ‘Disgusting kids , they need naming and shaming.’

Charlotte Whiteman has moved from the area, ‘Something needs doing about these kids! I’m glad I moved from that area after having a group of kids trying to boot my door in whilst I had 4 young children in my house scaring them all. They have no respect for anyone or anything around them.’

Stills from the seven-second video on Scott Benton’s Facebook page are featured in this article. 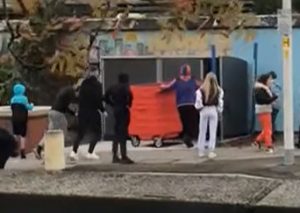 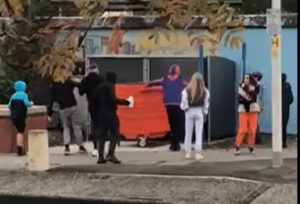