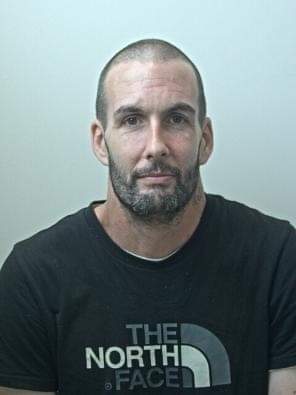 He killed his neighbour in a horrific attack.

A Blackpool man who killed his neighbour by punching him to the floor and stamping on his head has today (21/5/21) been jailed for life for his murder.

Andrew Claydon, 45, was found guilty of the murder of Matthew Pearson following a trial earlier this month.

Police were called around 6:45pm on 18th July 2020, after reports of an assault on Lytham Road, Blackpool close to the Farmer’s Arms public house.

Police and paramedics attended a short time later, by which time Mr Pearson had returned to his flat, a short distance from the scene. Mr Pearson was clearly injured and confused, with blood coming from his ear. He was taken to Blackpool Victoria Hospital, and then transferred to Royal Preston Hospital when the extent of his brain injury became apparent. Despite the best efforts of medical staff, Mr Pearson’s condition deteriorated, and he died as a result of his injuries on 2nd August.

Claydon was located and arrested on 20th July. He was initially charged with assault occasioning grievous bodily harm, and this was amended to murder after Mr Pearson died on 2nd August. The cause of death was established at the post-mortem examination to be blunt head trauma.

Detectives identified several witnesses, and others came forward as a result of appeals in the local media, which further assisted the investigation.

By carefully piecing together CCTV, witness evidence, a forensic scene examination and specialist pathology evidence, the investigation team were able to prove that Mr Pearson’s fatal injuries could only have been inflicted by Andrew Claydon on 18th July.

Claydon, of Lytham Road, Blackpool, admitted manslaughter but denied the murder charge but was convicted after a trial at Preston Crown Court. He was today sentenced to life and will serve a minimum of 14 years before he is considered for parole.

Detective Inspector Mark Dickinson of Lancashire Constabulary’s Major Investigation Team said: “This was a callous and cowardly attack on a vulnerable man who had little prospect of defending himself.

“The motive for the assault is still unknown as Andrew Claydon has never given a reason why he launched such a vicious assault on a man who presented no threat whatsoever towards him.

“Matthew was punched with no indication an attack was coming, then thrown to the ground, probably causing his head to hit the kerb. It seems likely that he was already unconscious as Claydon violently stamped on the side of his head. Matthew then lay unconscious for over two minutes before slowly picking himself up and staggering back to his flat, only around 40 yards away.

“The damage to Matthew’s skull and brain had already been done by that stage, and despite receiving medical attention and specialist care at Royal Preston, doctors were, sadly, unable to save him.

“I would like to take the opportunity to thank those who reported the matter to the police and ensured that everything possible was done to help Matthew Pearson, also the witnesses who came forward and assisted with the investigation.
“Matthew’s family have maintained their dignity throughout the investigation and court process, and they continue to have my deepest sympathies.”

In a tribute Matthew’s family said: “Matthew was a kind, gentle and intelligent man with a smile that you would never forget. He had the biggest heart and was always trying to take care of others and keep them safe.

“Matthew loved the simple things in life walking to the tops of the hills to see the beautiful views, or sitting at the side of the river with his fishing rod and some sandwiches. The only thing he loved more than the outdoors was reading, you would never see him without a book.

You would meet him and think he couldn’t possibly have a book with him and then one would appear like a magic trick, he would tell you with such enthusiasm all about the book almost as if it was the first time he had ever read.

“He also had a great love of history and as a younger man would often be found chatting with his Grandad about the war. He loved all parts of history and had the most incredible knowledge.

“His knowledge did not stop at history his intelligence was most impressive, always knowing the answers to the most obscure questions while not having a clue about the latest reality tv shows, perfect to have on your team at the pub quiz. You could say in many ways Matthew was an old soul. Someone who if you meet him you could never forget, a true loss to all who knew him.”