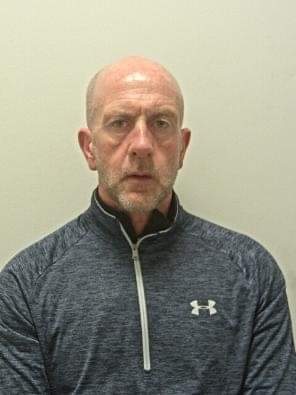 The 55 year old man was sentenced at Preston Crown Court.

From Blackpool Police – A Blackpool man who stalked a woman, entering her home when she was at work, has been jailed.

Stephen Boyne, 55, of St Helens Close, was sentenced at Preston Crown Court on Tuesday (May 4).

Boyne had been arrested earlier this year after a woman approached police at a petrol station in Kirkham reporting a man was following her in a car. The victim pointed to the vehicle, driven by Boyne, with officers giving words of advice to leave the area, initially arranging a voluntary interview with him.

The woman then gave further information to police, reporting a number of previous incidents involving Boyne, who was known to her.

In February, Boyne had messaged the victim to say he knew she had a number of items in her house which could not be seen from outside. She raised this with officers and highlighted concerns Boyne had access to the address.

The same month he visited the victim, shouting through her letterbox and an open window trying to speak to her.

The victim changed the locks and urged Boyne not to contact her again.

In March the victim was told by a neighbour Boyne’s car had been seen close to her address. The same day she left the property and saw a man with her hood up approaching her. The man, Boyne, said her name with the woman getting in her car and leaving the area.

She drove out of the estate and was followed by Boyne in his vehicle. Despite her best efforts Boyne continued to follow the victim, who saw police at the petrol station at Kirkham and stopped officers for help.

Officers seized his phone which was examined. The phone had two photos which showed the victim’s work calendar from her kitchen. The date and time stamp proved the pictures were taken when the victim was out of the house at work.

Boyne was charged with stalking. He appeared at court and pleaded guilty.

He was handed a 35 week prison sentence and a restraining order, preventing him from contacting the woman.

PC Natalie Tidmas, of Blackpool Police, said: “This was a very traumatic and disturbing ordeal for the victim who over a period of several months became concerned by Boyne’s increasingly erratic and worrying behaviour.

“Despite blocking Boyne’s phone number he started emailing her, as well as turning up at her address unannounced.

“The incidents culminated with Boyne following the victim in her car before she raised the alarm and spoke to police officers.

“When Boyne’s phone information was examined, it proved he had a key to her property and was entering the address when she was at work, taking pictures of her work diary.

“This must have been very frightening for the victim and I must praise her strength in coming forward, contacting police and supporting a prosecution.

“The victim has asked me to urge people in this situation to seek help. It doesn’t matter what walk of life you are from it can happen to anyone. Please tell your friends, ring police, or this will never stop.

“We would urge anyone who is being affected by stalking to speak to a local officer, contact us on 101 or ring the National Stalking Helpline on 0808 802 0300. All reports will be taken seriously and dealt with robustly.

PrevPreviousCorrie’s Summer Celebrates Her Birthday In Blackpool – Before Her Major Part In Storyline!
NextWeather Watchers Warn Of A Wet And Windy Weekend For Lytham St. Anne’sNext
Related Posts