Blackpool’s Driving Theory Test Centre which is located at the Technology Park in Faraday Way is to close its doors. It is one of six test centres in the North West to be axed in a review by the Driver and Vehicle Standards Agency (DVSA). This follows an evaluation of test centre locations by the DVSA as it battles with a backlog of tests due to the coronavirus lockdowns. But for learners in our area, it means a much longer round trip to the nearest theory test centre, which for drivers in Lytham St. Anne’s is in Preston.

The agency says it will handle increased demand at the Preston Test Centre by making more tests available from Monday 6th September.

The DVSA says there are no current plans to make changes to its practical tests in Blackpool and the Fylde, which will continue as normal.

The move has caused an uproar among Fylde instructors, with some saying they intend to ‘fight’ the decision to keep the Blackpool driving theory test centre open.

Local driving instructor David Bradley told the Blackpool Gazette, ‘We have today been informed that the theory driving test centre at Blackpool is to be permanently closed. We are further informed that our nearest theory centre will be Preston. We personally think this decision is a disgrace. It comes without any thought or regard for the inconvenience and hardship that the closure will cause to our customers. We will keep you updated on the situation but be assured we and other local driving schools intend to fight on your behalf to try and keep a test centre open for Blackpool, Wyre and Fylde learners.’ 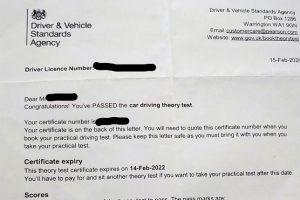 The Pavilion is open with outdoor seating…

LINE UP ANNOUNCEMENT FOR THE ST ANNE’S VIRTUAL SWITCH ON