Carrie Johnson has today (Saturday 31st July) announced she is pregnant with her second child with Boris Johnson. She and Boris, 57, welcomed their first baby, Wilfred, at the end of April in 2020. The December new  arrival will mean the Prime Minister then has at least seven children, though he has not officially confirmed the exact number after leading a previously tangled love life.

The Prime Minister’s wife, 33, revealed on Instagram today that she is expecting a December birth.  Carrie described the child she was expecting as a ‘rainbow baby’ – a term for a child born to a family that has previously lost another due to stillbirth or death during infancy.

The Instagram post from Carrie says, ‘Hoping for our rainbow baby this Christmas. At the beginning of the year, I had a miscarriage which left me heartbroken.

‘I feel incredibly blessed to be pregnant again but I’ve also felt like a bag of nerves. Fertility issues can be really hard for many people, particularly when on platforms like Instagram it can look like everything is only ever going well.

‘I found it a real comfort to hear from people who had also experienced loss so I hope that in some very small way sharing this might help others too.’ 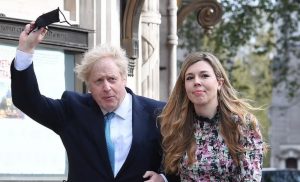 Heima Lytham closes its doors as estate agent will move in

What are these drones doing???