Lancashire County Council Cabinet has agreed the construction of a new two-way, three-metre-wide cycle track on the northbound, coastal side of the A584 Clifton Drive North, with a separate two-metre-wide footway on the carriageway side. The new cycle track will run between the busy road’s junction with Highbury Road West and Squires Gate and will replace the non-partitioned cycle lane currently in place

The design will mean that cyclists will pass behind the bus stops along the route so as to avoid crossing paths with passengers getting on or off public transport. The positioning of the bus stops on the northbound side of the road will also be amended to space them out more evenly, reducing their overall number from five to four.

The existing pelican crossing at the former entrance to the old Pontins complex will be removed. Instead, there will be five new pedestrian refuge islands along the route.

Because there is currently insufficient funding to enable more complex junction remodelling, short sections of shared cycleway and footpath will be included at the start and end of the route.

County Councillor Peter Buckley, Cabinet Member For Cultural Services, said, ‘The introduction of a segregated cycleway will encourage recreational cyclists and families and the additional pedestrian refuges will help those in the Coastal Dunes estate, which is the former Pontins site, to be able to cross the road safely.’

The project will cost £1.1 million overall, and will be jointly funded by the Lancashire County Council  and Sustrans, the custodian of the National Cycle Network, which has secured a £615,000 grant for the scheme from the Department for Transport.

The road will also see a reduction in its speed limit from 40 to 30 miles-per-hour (where the lower limit does not already apply). However, plans to turn that section of Clifton Drive North into a ‘red route’ that prohibits stopping in almost all circumstances have been put on hold after nearly 50 complaints from local residents. It was decided that an alternative parking solution would be developed for further public consultation before being brought back to cabinet at a later date.

County Councillor Peter Buckley said, ‘The introduction of the red route would have particularly impacted those residents in the southern section of the road near the Highbury Road traffic lights and I’m pleased that revised parking proposals are being considered.’ 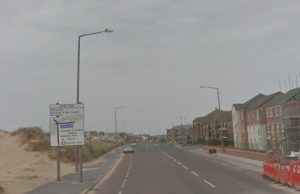 PrevPreviousHave you seen this man?
NextHealth Care Worries – Fylde Worst In Country For GPs Per Number Of InhabitantsNext
Related Posts