Olympic medal winning marathon athlete Shelly Woods and her three year old son Leo have cut the ribbon and officially opened the Toddler Play area at Park View 4U today. The site now has much improved access for prams and wheelchairs thanks to new rubber mulch paths and an innovative safety surface, funded by a £20,000 grant from the Windmill Community Benefit Society. This now makes the popular play area accessible all year round.

This play area is extremely popular and a much loved area of the community park. Park View ranger Julie Norman proudly said, ‘We are hoping these improvements will make a huge difference for our visitors who will now be able to use the site all year round. We know that this play area is well loved by our local community as they were queueing to get in as soon as the new surfaces were completed. We hope to continue to improve facilities across the site including a new path way through the woodlands which we plan to open this autumn.’

Shelly Woods who opened the facility is an inspirational, elite British Paralympic athlete from Layton in Blackpool. She has competed in two Paralympic Games, Beijing in 2008 and London in 2012, where she won three medals. She is also a world-class marathon athlete, winning the women’s elite wheelchair race at the 2007 and 2012 London Marathon.
Park View 4U is a Lytham based charity who developed a boggy field into a three generational park, which now plays a central role to community life in the area. Park View 4U has a bespoke Sand and Water Play area, Toddler and Teen Zones, BMX track, Skate ramps, Playfit equipment, Multi Use Games Area, Amphitheatre, Football pitches, Woodland Walk and a wealth of facilities for the benefit and enjoyment of the local community. 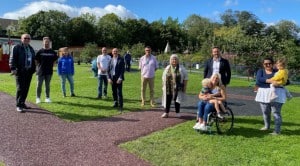 Charlotte Dawson’s boyfriend pops the question next to her late dad’s statue!

Get Set For A September ‘Indian Summer’ In Lytham St. Anne’s