Significant changes will be presented in a revised Highway Code, to be published in the Autumn. For the first time a  ‘hierarchy of road users’ (depicted below) will be introduced, aiming not only to further encourage but also boost the safety of pedestrians and cyclists.  The rule changes will give more focus to walking and cycling than ever before in a bid to encourage more to ditch their vehicles.

Four of the new rules are:

The aims of the planned changes include:

Transport Secretary Grant Shapps announced these updates as part of a £338m package to boost cycling and walking. In an effort to capitalise on the walking and cycling boom during the COVID pandemic, the government will also boost funding for the construction of hundreds of miles of new cycle lanes, improvements to the National Cycle Network, and the delivery of new schemes to encourage walking. 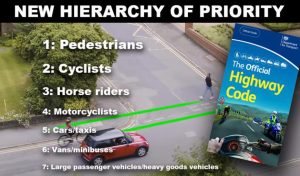 Featured graphic illustration at top of article from The Mail Online

Are Current Covid-19 Regulations Becoming Too Wide Ranging And Onerous To Police?

Lytham St. Anne’s Pensioners In Line For 2.5% Rise Thanks To The ‘Triple Lock’ – Which Is Explained Here!