Fylde Council has submitted detailed findings which explore steps to improve local transport including the possibility of delivering half-hourly services between Blackpool South and Preston, along with measures that improve the reliability and punctuality of the service.

The South Fylde Line, which goes through Lytham, St Anne’s and Blackpool Pleasure Beach, was reduced to a single track from Kirkham in the early 1980s and the report recommends the construction of a ‘passing loop’ which would double the service from the current one train per hour.

The report also identifies a range of other measures to improve the service including upgrading the level crossings at Moss Side as well as considering the South Fylde Line as a ‘test bed’ for the affordable electrification of secondary railway lines.

In addition, the report also discusses a possible second phase of development including linking the South Fylde line to the Blackpool Tramway.

Among the benefits expected from the improvements are increased visitor numbers to the South Fylde coast, the use of sustainable, decarbonised transport and tackling deprivation through better access to education and job opportunities as well as encouraging new businesses and tourism.

If the Department of Transport decides to take the ideas forward, a further detailed report may be commissioned to assess which options should be funded and delivered.

The report, which also includes making Moss Side a ‘request stop’, identifies key transport problems on the South Fylde line including low service frequency, unreliability, long journey times, lack of capacity at peak times and the need to change at Preston for longer train journeys.

Councillor Karen Buckley, Leader of Fylde Council, said: ‘This report is the first stage of looking at how to improve journey times, reliability and punctuality along the South Fylde line. It identifies the transport problems, sets out the transport objectives and has shaped a phased package of improvements to public transport in the south Blackpool and south Fylde areas. The study also considers the wider impact of transport problems on society as well as Government aspirations to promote ‘levelling-up’ and net zero emissions by 2050. The completion of this report is an extremely positive first step and we have now presented these findings to the Department for Transport for further consideration.’ 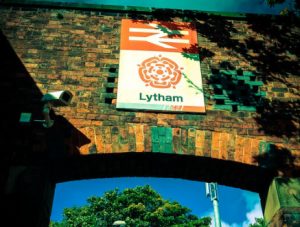 Have you seen Paul Jennings?

The Easing Of Restrictions And Spring Weather Has Encouraged Visitors To Return To Lytham St. Anne’s