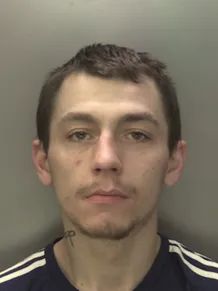 Can you help Blackpool Police?

Blackpool Police have issued an appeal –

Can you help us find this man?

Patrick Ronan, 24, believed to be from the West Midlands area, is wanted in connection with two incidents which occurred in the early hours of this morning (Wednesday, September 1st) in Blackpool.

The first was an assault which took place on a tram in the Norbreck Castle area at around 12.20am, when a man, a woman and a girl assaulted several people who were not known to them.

The second incident occurred a short time later, when a man, woman and girl approached a man on a moped in Anchorsholme Park, before making threats towards him and making off with the moped.

A woman and girl, aged 23 and 13 and both from Birmingham, were arrested not long after on suspicion of assault – ABH, criminal damage to a vehicle and taking a motor vehicle.

We now want to speak to Ronan as part of our enquiries and are asking anybody who has seen him, or knows where he may be, to get in touch.

He is described as being around 5ft 9ins tall, of slim build, with short, brown hair and a tattoo on the right side of his neck. He speaks with a Birmingham accent. He has links to the West Midlands area.

We are also asking anybody with information about either incident to contact us.

DI Abi Finch-Hall, of Blackpool Police, said: “An investigation is underway and we would now like to trace Patrick Ronan as part of those enquiries. We are asking anybody with information about his whereabouts to get in touch with us straight away.

“We would also ask anybody who witnessed either incident to contact us. Perhaps you caught some of it on your mobile phone, or maybe you saw all or part of what happened. Whatever you know, please let us know.”