Barnardo’s charity shop on Clifton Street’s frustrations over the constant dumping of donations during the pandemic has reached a new level. 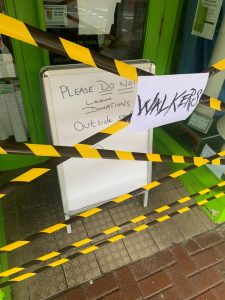 A polite sign has been erected outside the store saying “Please Do Not Leave Donations  Outside Shop”.

However, riled resident Tim Sumner has contacted Lytham St Annes News with a development on the situation.  He exclusively told Lytham St Annes News “On my morning walk today I noticed “crime scene” tape blocking the entranceway to the shop, and a very crude sign saying “Wankers”.  I’m not sure if this has been put up by the frustrated volunteers who are tackling mountains of “donations” or whether it has been put up by someone wanting to get rid of their unwanted goods in a bin bag”  Whoever has written the sign “wankers” has been incredibly thoughtless as young children pass this shop on a daily basis.  He added “I’m appalled”. 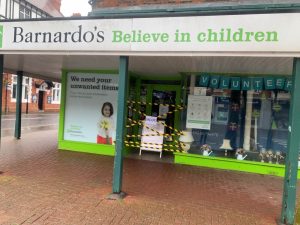 The majority of the charity shops in the area have had to tackle an unprecedented volume of unwanted clothes, toys, and general goods during the three lockdowns which has become unmanageable for the volunteers.   It has been so bad that on some occasions the mountain of bin bags has impeded the entranceway to the shops.  One charity shop worker said “people use the charity shop as an alternative to the tip.  90% of of the donations are just unsellable rubbish”.

Blackpool to join the Lancashire-wide lockdown

The final full moon of the decade occurs tonight.

Another Busy Morning For Lytham Coastguard

Will Black Friday 2020 be cancelled? Businesses urge residents to SHOP LOCAL in fears that Amazon will cash in on the newest Government Guidelines

Illuminations Extended Through Christmas Into 2021