Almost 200 people across the UK are sick with salmonella – with more than 50 taken to hospital – after consuming a bad batch of Mr Porky Pork Scratchings. The affected people have fallen ill with diarrhoea, vomiting and fever. Supermarkets have announced emergency recalls of the products. Public Health England and the Food Standards Agency have also urged people not to eat Mr Porky’s Scratchings with a best-before date up to February 2022.

There have been 179 reported cases of salmonella, according to the Food Standards Agency and Food Standards Scotland – with a third needing hospital treatment.

Rachael Newberry, 53, told The Sun:  ‘A few days after I ate them, my stomach was gurgling and I felt awful. I was on the toilet all that night. I have been ill for about a week now and have only just started to feel better. I’ve been completely put off pork scratchings for life.’

The dodgy Mr Porky products were made at a factory in Bolton, Lancashire which is run by the Tayto Group, Britain’s largest snack producer.

The group behind the snack warned customers not to eat the product, it said: ‘If you have bought any of the above products do not eat them. Instead, return them to the store from where they were bought for a full refund.’

The company said they are ‘recalling all products as a precautionary measure’ and point of sale notices will be displayed in all stores where the product is on sale. 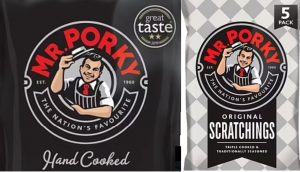 Full Covid-19 Vaccination Roll-Out Plans Leaked – Will You Have The Vaccine?

New picture released with the appeal for Lily