Blackpool Magistrates Court has heard today (Wednesday 3rd November) that a Fylde undertaker had extreme pornographic images involving corpses and images of himself having sex with a dog.

The man, Nigel Robinson-Wright, 40, of Chain Lane in Staining is also accused of trying to arrange the sexual abuse of a toddler girl.

He was arrested after a probe by the Metropolitan Police.

Prosecuting, Peter Kelly said, ‘The pictures in the charges also include sexual abuse of corpses he, as a funeral director, would have access to and which could be taken at his place of work.’

Robinson-Wright, who has been involved in the possessing annual Armistice Day Parades in Blackpool and local community groups, was charged with arranging or facilitating the commission of a child sex offence, three counts of indecent images of a child, and possessing extreme pornography.

Robinson-Wright was kept in custody and his case sent to Preston Crown Court, where he was scheduled to appear on 1st December, 2021.

Robinson-Wright posted this picture during lockdown. 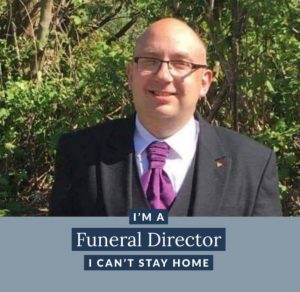 A hairy moment for Boris

POLICE APPEAL FOR DRIVER WHO KNOWINGLY LEFT THE SCENE