It was a busy beginning to the Easter weekend for the volunteers from HM Coastguard Lytham when they were called out on a more unusual mission at 12.10 p.m. on Good Friday afternoon. Reports had been received that two riderless horses were running on the beach in the Cleveleys area. The Lytham team were joined by HM Coastguard Fleetwood and on arriving on the scene they were pleased to find the horses owners had fortunately managed to get control of the horses.  After some checks to the welfare of the riders (& horses), the operations room was satisfied so the HM Coastguard were stood down.

The busy volunteers were also called out at 4.23 p.m. on Thursday 1st April to reports of a small vessel in difficulty in the Lytham area. The coastguard arrived on scene to find the casualty’s topper dinghy had capsized and the mast snapped, fortunately the casualty was able to make their own way back to shore.  Lytham St Anne’s RNLI were also called out with their ILB Inshore Lifeboat.  (Photograph of the incident below) 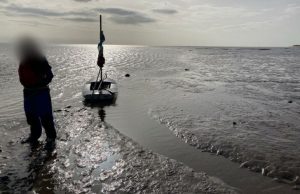 Lytham St, Anne’s News expresses its gratitude to the volunteers of HM Coastguard and Lytham St. Anne’s RNLI for their dedicated work along our coastline.

The Children’s Adventure Play Area at Fairhaven Is Now Open