A large scale emergency response took place yesterday evening (22.06.21) at 6.30 p.m. after two people were seen struggling in the Irish Sea off the Blackpool coastline. North West Ambulance Service, the RNLI Blackpool and HM Coastguard Lytham were all called out to the beach near South Pier after receiving reports of two people struggling in the sea.

The pair had been shouting for help after finding themselves unable to reach the shoreline. Lifeboats were launched and the RNLI successfully brought both individuals to safety.

An RNLI Blackpool spokesperson said, ‘Our RNLI volunteers were called out shortly before 6.30pm to assist two people in the sea near South Pier who were shouting for help and struggling to reach the shore. Both D class lifeboats launched, helped the casualties into the lifeboat and took them back to safety. North West Ambulance Service and HM Coastguard volunteers also attended.’ 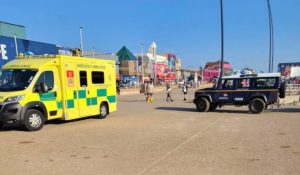 Our brave volunteers from HM Coastguard Lytham were also called out this morning at 9.13 a.m. to reports of a person in the water, possibly in difficulty around the Central Pier area. RNLI Blackpool, Blackpool Police and Blackpool Beach Patrol also all arrived on scene and found the casualty was not in any distress.  HM Coastguard Lytham say it was a false alarm with good intent!

One Rule For Football’s Elite VIPs – Another Rule For YOU and ME!

Pubs, bars and restaurants may have to close in order for Government to reopen schools next month

Views Sought On Restarting St.Anne’s Beach Sand Extraction For Use In Concrete Making

Zest to Reopen THIS Friday after Covid Clean

Person Taken To Hospital After House Fire In St. Anne’s

Don’t forget about small furry pets in a heatwave