Tram fans are in for treat when a 1937-built streamliner with its iconic advertising livery revived will once again be seen on the Blackpool tramrail.  This tram, with skulls covering the full face of each end to advertise the Ghost Train at Coral Island, was last seen over twenty years ago, from 1996 to late 2000.

The Fylde Transport Trust (FTT) now own the tram and has commissioned Blackpool Transport to repaint the tram in its former eye-catching design in its Rigby Road workshop. FFT is now having discussions with Blackpool Heritage Tram Tours about the tram’s future once its restoration and repaint is complete.  They said in a statement that they foresee an ‘eye catching role within the heritage tram operation’.

And there is more good news for Blackpool’s Tram fans. Essential rewiring to the ‘Western Train’ is to be completed in time for the 2021 Illuminations.  This iconic train has not run since the end of the 2019 illuminations and was undergoing a full external rewire, body overhaul and repaint when the pandemic struck! All heritage services were suspended, and with no income being generated, the projected has halted, and the engineering team furloughed. The ‘Western Train’ has been a popular feature on the Promenade since 1962 when it was created as one of a small fleet of novelty illuminated trams including the ‘Space Rocket’ and ‘HMS Blackpool’. The ‘Western Train’ was withdrawn from service in 1999 and faced an uncertain future but a National Heritage National Lottery Fund grant saw it fully restored in 2009. 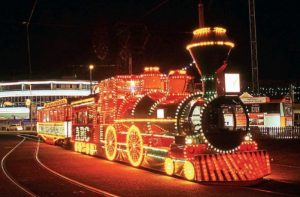 Planning On An Al-Fresco Drink Or Meal On Monday – Wear A Warm Coat!