Two stores who both have outlets in Lytham St. Anne’s are currently waging war in a hard-fought legal battle over a caterpillar cake.

Marks & Spencer has commenced legal action against Aldi, claiming the budget retailer has infringed the copyright of its celebrated Colin the Caterpillar cake.  M&S say the similarity between the two products leads consumers to believe they are of the same standard. Furthermore, M&S claim that Aldi is ‘riding on the coat-tails’ of M&S’s reputation and wants Aldi to immediately remove the product from sale and agree not to sell anything similar in the future.

M&S has three trademarks relating to Colin, which the retailer believes means Colin has acquired and retains an enhanced distinctive character and reputation. A spokesperson said: ‘Because we know the M&S brand is special to our customers and they expect only the very best from us, love and care goes into every M&S product on our shelves. So we want to protect Colin and his friend Connie and our reputation for freshness, quality, innovation and value.’

M&S launched Colin the Caterpillar around 30 years ago and his appearance has been substantially unchanged since around 2004, except for adaptations for events such as Halloween and Christmas, and related products such as Connie the Caterpillar.

Carl Steele, head of intellectual property at law firm Ashfords, explains: ‘For many years now, Aldi have been selling products under brand names and using packaging that is ‘unnecessarily similar’ to that of well-known and established brands. They do so in the hope that, when coming across the Aldi product, consumers instinctively adopt the same positive feelings and emotions as they have about the well-known branded product. Brand owners resent such activity and regard it as ‘free-riding’ off the brand owner’s time, cost and effort in building up and promoting their brands.’ 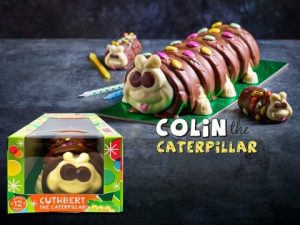 Statement from Lancashire’s leaders on coronavirus talks with government

MAJOR ACCIDENT on link between M55 and M6, causing gridlock traffic jam on M55 and M6

The final full moon of the decade occurs tonight.