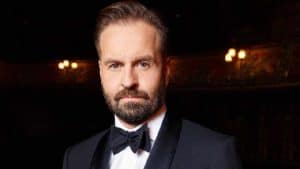 Local hero, recording and West End star, Alfie Boe, has placed his lavish mansion up for sale as the renounced singer confirmed his amicable separation from Sarah, his wife of sixteen years. Alfie is no stranger to Lytham St Anne’s – he was a big part of the humble beginnings of the Lytham Festival –  One Night on Lytham Green which featuring Alfie with Lesley Garett – back in 2009. He returned to sell out Last Night at the Proms in 2012.  The Lowther Pavilion are currently advertising the streaming of his ‘Back Together’ concert featuring Alfie with Michael Ball at the venue at 7.30 p.m. on 31st October.

Alfie Boe was born in Blackpool and brought up in Fleetwood. He was the youngest of nine children and was discovered at the age of 17 when working at the TVR factory in Blackpool. He sang opera arias while he polished the cars, and one day was overheard by a client with connections in the music industry.  He was so impressed that he put Alfie forward for an audition for the D’Oyly Carte Opera Company. Alfie’s wonderful career had begun!

Sadly, Alfie and his wife Sarah have seemingly joined a host of celebrities whose marriages have suffered during the Coronavirus Lockdown.  Addressing reports in the press about their break-up, he said in a statement, reported by the Daily Express, ‘I can confirm that we have separated.’ Seemingly referring to another claim that he had joined exclusive dating app Raya, Alfie added, ‘Other parts of the story though are absolute nonsense.’ National papers had previously reported that his profile was on the elite, application-only Raya dating app used by stars such as Cara Delevingne and Drew Barrymore

A source told the Daily Mail: ‘It seems lockdown was just too much for Alfie and Sarah. They have found their relationship increasingly strained and he says they’ve now made the decision to separate. He is a doting dad and wants to keep things amicable for the sake of the kids. But he feels ready to move on.’

Murrays Estate Agents are marketing their Grade II listed home, set near the village of Chalford in the Cotswolds, for £2.5 million. It is described as being a five bedroom house set in seven acres of ancient meadows and woodlands, with a two bedroom annexe in the grounds. It includes a three-room home office suite, a swimming pool, gym, a cinema room, tennis courts, a landscaped garden and its own orangery offering stunning views of the Gloucestershire countryside.

Fashion Nails Foodbank Delighted with the Generosity of Lytham Residents

Fuel Being Stolen From Vehicles Overnight in the Area