Congratulations to Lytham Hall as the whole team celebrate being awarded one of the most prestigious awards in the Heritage and Building Conservation industry – joint 1st prize in the Historic Houses Restoration Awards. This well-deserved accolade was announced yesterday (Tuesday 15th November).

A Spokesperson for the Hall has shared a huge thank you to everyone who has contributed their outstanding workmanship and use of traditional skills resulting in this huge achievement. Passion, drive, determination and commitment have been key to this fabulous accolade.

Lytham Hall will share the prestigious national award with Wolterton Hall in Norfolk. Judges were unable to separate the two venues’ restoration wonders and both will share the accolade.

The Historic Houses Restoration Award has been running for 14 years and is sponsored by Sotheby’s auction house. It recognises outstanding examples of work to protect and preserve historic buildings across the UK.

Heritage Trust for the North West (HTNW) has overseen operations at Lytham Hall since 2000. The Grade I listed building’s road to revival has been one of challenge.

Funding bids were dashed over the years and just six-years-ago Lytham Hall was in a such a significant state of disrepair it was put on Historic England’s At Risk Register.

But in 2017 a new HTNW management team started afresh to create a sustainable model which in turn would help fund the ongoing restoration project.

Under the direction of House Managers Peter Anthony and Paul Lomax, HTNW Trustee Stephen Williams and wider team set about restoring Lytham Hall and its Grade II listed historic parkland, which was completed over a five-year period.

Stephen Williams, HTNW Trustee at Lytham Hall, said: ‘Lytham Hall remains a magnificent gemstone in the crown of the Fylde coast. The management, staff, and volunteers are a truly amazing team, and I think this award shows how far we’ve come over the past five years.  We can’t underestimate the immense help and support we got from locals and friends of the hall, as the small grants obtained and funds raised through events were vital to our success. It’s truly been a team effort.’

Lytham Hall’s journey to today’s award is as colourful as the life of the Clifton Family that once lived there.

Lytham Hall’s General Manager, Peter Anthony said: ‘I can’t put into words what this award means to everyone who has worked so hard and achieved so much. Our family of staff and our army of volunteers have a commitment and dedication second to none. This award is testament to the sheer passion of an amazing team.  This really is the icing on the cake and will put many happy smiles on many faces. Lytham Hall is now a heritage asset and attraction that we can be collectively proud of and the visitor numbers prove just that. We thank all our approved contractors with all their specialist skills that have helped us make this jewel in the Crown of Lancashire shine once again.’

Paul Lomax, Lytham Hall’s Deputy General Manager, added: ‘To receive this award means the absolute world to so many. Our team has literally never stopped and never given up, even through the toughest of times, to achieve all the magnificent results you can see today. Through our entrepreneurial nature and determination, we have managed to raise the funds and resources that have financed much of the outstanding restoration work. The restoration has been a great joint effort of which everyone involved should feel extremely proud. This award will motivate us to continue in our quest here at the finest Georgian house in Lancashire.’ 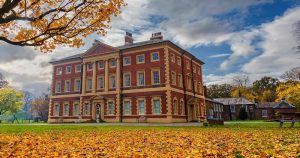