Lytham St. Anne’s is not currently on the list of areas which have been included in the trials. Just four areas have been chosen for the trials – the West Midlands; Portsmouth and Southampton; the West of England Combined Authority (Bristol, Bath and surrounding areas); and Derby and Nottingham.

However, this initiative could happen nationwide very soon as the Department for Transport says: ‘A high number of areas across Great Britain have expressed an interest in running e-scooter trials.’  It is thought fifty authorities have asked to be included as part of their green agenda.

The government’s announcement about the e-scooter trials includes some health and safety requirements, including a 15.5 mph (around 25 km/h) maximum speed limit. Users will also need to be over the age of 16, and will need to have at least a provisional car, motorcycle, or moped license. Helmets will be recommended but not mandatory, and the scooters will continue to not be allowed on pavements.

‘E-scooters may offer the potential for convenient, clean and cost-effective travel that may also help ease the burden on the transport network, provide another green alternative to get around and allow for social distancing,’ Transport Minister, Rachel Maclean, said. ‘The trials will allow us to test whether they do these things.’

Currently, whilst you can buy an electric scooter, you can’t ride it on a public road, cycle lane or pavement anywhere in the United Kingdom. Anyone who does is committing an offence. The only place an e-scooter can be used is on private land, with the permission of the landowner.  Under a change in legislation, the Department for Transport wants e-scooters rental schemes tried out across England, Wales and Scotland. Riders wouldn’t need to take out their own insurance to hire an e-scooter, but they would need a driving licence or at least provisional one. The hired vehicles could then be used – legally – within set geographical boundaries. But it would still be illegal to use a privately-owned e-scooter on a public road, even if you were in a trial area. The government says it will monitor safety and keep the year-long scheme – part of a £2 billion plan to invest in greener travel – under review. 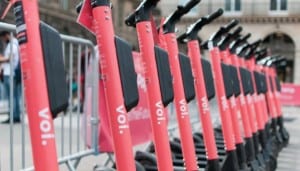