Well known Lytham St. Anne’s resident Tim Lime has issued a stark warning having been seemingly almost tricked into parting with £5,000 for Mayfair – currently part of nationwide McDonald’s Monopoly promotion.  Tim said, ‘I know Mayfair is the most scarce, highest prized property in the McDonald’s collectable competition. You can win £100,000 cash if you collect the dark blue properties – these are Park Lane and the ultra-rare Mayfair. There are only four Mayfair stickers, but there are millions of Park Lane stickers. I already had a Park Lane sticker – so I was very happy put in a bid of £5,000 for a Mayfair sticker on eBay. And I would have continued to bid as I thought it was worth a lot more.’

Tim was saved from a massive mistake by his wife.  Time explains, ‘However, my eagle eyed wife noticed that I was bidding on a what was just a photo of the Mayfair sticker.  This was in really small print.  I was well and truly fooled.’

At the time of writing (Saturday) the highest bid is £7,900 for the photograph! (see below)

Sunday Update.  The photo of the Mayfair token has now been SOLD on eBay for £10,600.  It has springboarded lots of other similar offers on the site!

Tim is now warning others about this seemingly amazing offer on the popular auction site. 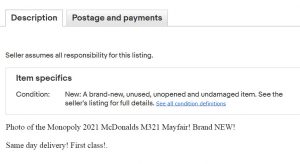 Man Claiming To Have HIV Head-butts & Spits At Police

Do Not Eat These Chicken Products – Urgent Recall