Then early this morning (Sunday 29th August) at 6.17 a.m. HM Coastguard Lytham, together with the police, RNLI Blackpool and North West Ambulanc Service, wer tasked with a dawn callout (picrure below).  Sharing information about the incident, a Lytham HM Coastguard spokesperson said, ‘We were called out at 06.17 to reports of a person in the water around the Central Pier area. We quickly arrived on scene and located the person, the casualty was then recovered from the water and taken back to shore. They were then passed into the care of North West Ambulance Service NHS Trust. If you see a coastal emergency, dial and ask for the Coastguard!” 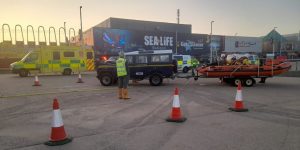 Full Covid-19 Vaccination Roll-Out Plans Leaked – Will You Have The Vaccine?

Missing children from the Chorley Area

March 1st – Is It Now Spring In Lytham St. Anne’s?