The Conservative Party Co-chairman Amanda Milling yesterday (10.07.2020) visited Blackpool.  She attended a special meeting hosted by local Conservative MPs, where she announced that the 2022 Conservative Spring Forum will be held in Blackpool – the first time the Tory Party have met in the resort since their National Party Conference in October 2007.  Hospitality services in Lytham St. Anne’s will also hope that they benefit from this influx of visitors from throughout the UK as Visit Blackpool estimated that hosting the  Conservative Spring Forum will be worth £2.4m to the town’s economy.

In recent years, Blackpool has fallen out of favour with the main parties as its conference facilities have not been updated, and has lost out to rivals including Manchester and Birmingham. In response, work began in 2018 on a new £25m conference centre at the Winter Gardens in order to bring back  some of that trade, and this development is due to be completed next year.

Amanda Milling said at the meeting, ‘I’m delighted to announce that we will be returning to Blackpool for the Conservative Party Spring Forum in two years’ time. Blackpool and the entire North West region are key parts of our plan to level-up the country and returning to the town reinforces our commitment to the task. I am looking forward to seeing Conservative Party supporters and activists making the trip to the seaside to enjoy the conference and everything this wonderful area has to offer.’

Ms Milling refused to be drawn on whether the Spring Conference would lead to the party eventually bringing back its main October conference. But she added the spring gathering was ‘one of the two key events for the Conservative Party’, usually attended by the Prime Minister and members of the cabinet.

The last Labour conference in Blackpool was held in 2002 – a spokesperson told the BBC’s North West Tonight that they hope to return to the resort very soon.

The picture below shows Michael Williams, Managing Director of the Winter Gardens, with Conservative Party Co-chairman Amanda Milling, Scott Benton MP and Paul Maynard MP in the Empress Ballroom and is courtesy of the Blackpool Gazette. 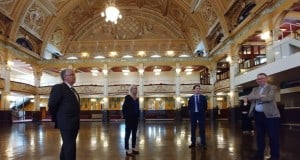