Blackpool’s Ocean Boulevard was closed last night as a 49 year old man climbed up the Big One rollercoaster at Blackpool Pleasure Beach. He came down on his own – and was arrested on suspicion of causing a public nuisance on reaching the ground.

A spokesperson for Lancashire Constabulary said, ‘We were called around 7.50pm yesterday (Monday, July 5) to a report of a concern for safety in Blackpool. A man had climbed part of the Big One rollercoaster at the Pleasure Beach in Ocean Boulevard. Emergency services attended with the Promenade closed. The man came down on his own and was later arrested. A 49-year-old man of no fixed address was arrested on suspicion of causing a public nuisance and is in custody.’ 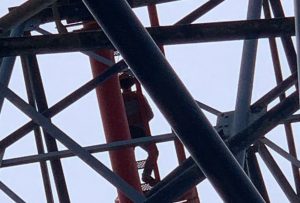 Have you seen Lily?

Born After 5th October, 1954 – Your Retirement Age Is Hiked Next Week!

LOCKDOWN 2.0: ONE MONTH of closure for Non-Essential Shops, Pubs and Restaurants

Have you seen Lily?