A shortage of night-time taxi drivers is creating hour-long queues for a cab home- sometimes sparking angry scenes as revellers who are drunk become impatient and aggressive.  Marshals have been employed on the busy streets by Blackpool Council to help alleviate the situation. This shortage of taxis comes after many drivers who lost fares during the lockdown switched to delivery work instead and are now reluctant to return to the hassles of night time taxi driving.

Dee Grant, 57, a director of C Cabs in Blackpool since 1995, told the Daily Mirror that the violence is the worse she has ever known it. ‘People are fighting and kicking cars.  Nights are the worse. The Council put marshals on but passengers are still throwing things at taxis, frustrated that they can’t get in. One of our drivers got punched through his window.’  She confirmed that many night drivers have secured new jobs. ‘They rather work for Amazon or DPD, where they meet people smiling at the door, instead of being punched.’

Ian Wharmby, Managing Director of Black Tax, said: ‘A lot of drivers left last year because there was no work and they have other jobs and are not coming back.’ He said taxis had stopped going down Queen Street after one was attacked and had a window smashed a few weeks ago.’ Some security has been put on Queen Street but we have stopped cabs going down there,” he said.

The Daily Mirror reported that one taxi firm in Blackpool is now offering cash incentives for night-time drivers, with one promising, ‘Get a £600 transfer fee when you switch.’

Dave Lawrie, of the National Private Hire and Taxi Association, blames lack of Government support during lockdown.  He said, ‘They found other jobs and haven’t come back. The level of abuse against drivers has gone up astronomically.  It’s a nightmare.’

Featured photograph From the Daily Mirror feature on the current difficulties of booking night-time taxis. 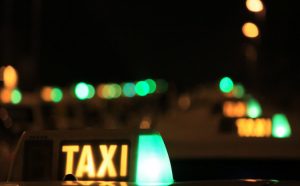 Clifton Square Gets Pre-Christmas Makeover – With A Spruce Up Coming For St.Anne’s

Your On-Going Flooding Concerns To Be Considered By Fylde Council This Coming Friday (19.03.2021)

Clifton Square Gets Pre-Christmas Makeover – With A Spruce Up Coming For St.Anne’s