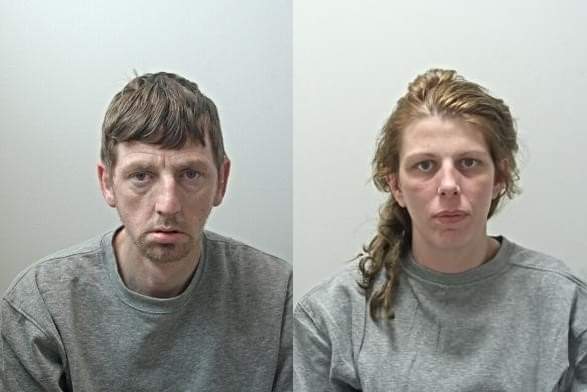 They fled empty handed after causing a small explosion 💥

From Blackpool Police – We are appealing for information to find two people wanted in connection with an attempted burglary where a cash machine was damaged in Bispham.

We were called around 3.50am yesterday (Tuesday, August 17) following an incident in Kincraig Road.

It was reported an ATM machine at the Spar store had been damaged following a small explosion.

No cash was stolen with the offenders making off from the scene.

Following CCTV enquiries, we want to speak to John O’Brian and Toni Butcher, pictured, in connection with the offence.

O’Brian, also know as Scottish Tony and Ryan McKeenan, 36, of Portree Road, Bispham, is described as white, 5ft 8in tall, of slim build with a large, crooked nose.

Butcher, 32, also of Portree Road, is described as white, 5ft 8in tall, of medium build with long brown hair and blue eyes. She may have a red mark around her neck.

Detectives are appealing for information and urging anyone who knows where O’Brian and Butcher are to come forward.

Det Con Paul Edmondson, of Blackpool Police, said: “O’Brian and Butcher are wanted by police in connection with a serious offence.

“A Spar store was left badly damaged during this incident in an attempted burglary.

“If you have seen either person, or know where they are, please call police immediately on 101 quoting log 0170 of August 17. In an emergency always call 999.”