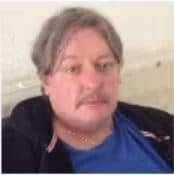 By Private EyeSeptember 23, 2020News
No Comments

Gary, aged 52, was last seen at his home address in Roby Road, Huyton on Tuesday, 8 September.

He is described as a white male, around 5ft 10in tall, with a pale complexion, brown hair and of stocky build.

When last seen he was wearing a grey and white t-shirt, black trousers and black trainers. He also wears a crucifix.

It is believed he may have travelled to the Windermere area of the Lake District.

We are becoming increasingly concerned for Gary’s whereabouts and anyone with information is asked to contact @MerPolCC, 101 or @missingpeople on 116 000.