Following reports of structural dangers, Blackpool Police together with Lancashire Fire and Rescue, entered the once popular and extremely busy venue, The Central Club in Kent Road, off Central Drive, on the afternoon of Friday 11th June.

On entering the seemingly abandoned building, Police discovered over  1,500 cannabis plants, along with a large amount of electrical equipment, located across the extensive three floors of the building.  They also found on the premises a 25 year old man, who was subsequently arrested for cannabis cultivation.  The site, which Police say was being used as a major cannabis farm, was cultivating plants which could eventually yield a street value of more than £1 million.  The Central Club since been cleared and the plants and equipment are to be destroyed.

Inspector Cara Leadbetter, of Blackpool Police, said, ‘The activities of drug dealers can have a dramatic effect on our communities. It can ruin lives, fuel other crime, such as burglary and robbery, and can instil fear in our neighbourhoods and we are determined to tackle that. It’s also really key that as part of this work, communities feel stronger and more empowered to do what they can to prevent serious organised crime from becoming the community norm. Local people are a vital source of intelligence and they need to help us to keep them safe by telling us what they know and turning rumour into hard evidence. We need the public to continue to work with us to help us tackle drug crime by informing us of any suspicious activity.’

The Central  Club has been on the market at a price of £379,950 courtesy of Alexandra Park Estates, who say that outline planning permission has been granted on the site  for the development of 12 Three Storey Terraced Houses with integral garages. 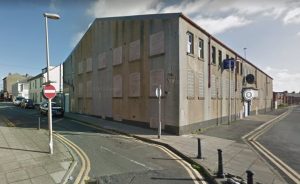 Have you seen Jason?

Local Schools Kids Encouraged to use GAME CONSOLES for Homeschooling

From Postponement to Cancellation – Britain’s Got No Talent 2021

Have you seen Jason?