The last few days have seen a new wave of scam messages being randomly sent to mobile phones in our area.  We have today been contacted by readers who received such messages on Friday, Saturday and Sunday evening.  An example of one of these received messages is shared below. 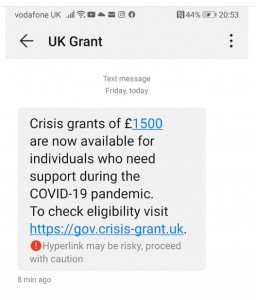 This scam warning should be shared with those who may be particularly vulnerable to such false messages promising financial help in these most difficult times. Such texts, which mimic official Government texts, are cleverly designed to trick vulnerable people into divulging sensitive personal and financial information. This text has been duly reported to Action Fraud – and this procedure should be followed if you, a friend or a relative receives such a message.  The Action Fraud website also currently highlights other recent scams including shopping frauds and deceptions centred on booking holidays.

A local resident has also reported an email which has arrived into his inbox seemingly to be from the Government promising a National Insurance refund (see below). Such fake emails are designed to look like they are from the Government by replicating the font and design of sections of the Gov.uk website.

The email tells the potential victim that the Government has taken steps to list Coronavirus as a notifiable disease in law, and that working alongside HM Revenue & Customs (HMRC) a new tax refund plan has been established to help support people’s finances during the recovery. All the person has to do in order to claim the cash is click on a link in the email, which takes them through to a page where they can supply their banking and personal details for the refund to be processed and provided.

If you think you may have fallen for a scam then it’s important to speak to your bank as soon as possible. 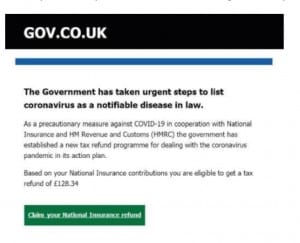 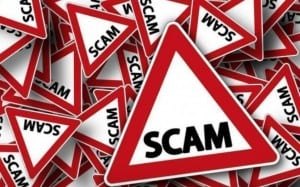 UPDATE: The owners of deceased dog found on beach have come forward

Blackpool Police to appear in ITV’s ‘In For A Penny’ TV Show!

Will Black Friday 2020 be cancelled? Businesses urge residents to SHOP LOCAL in fears that Amazon will cash in on the newest Government Guidelines

UPDATE: The owners of deceased dog found on beach have come forward