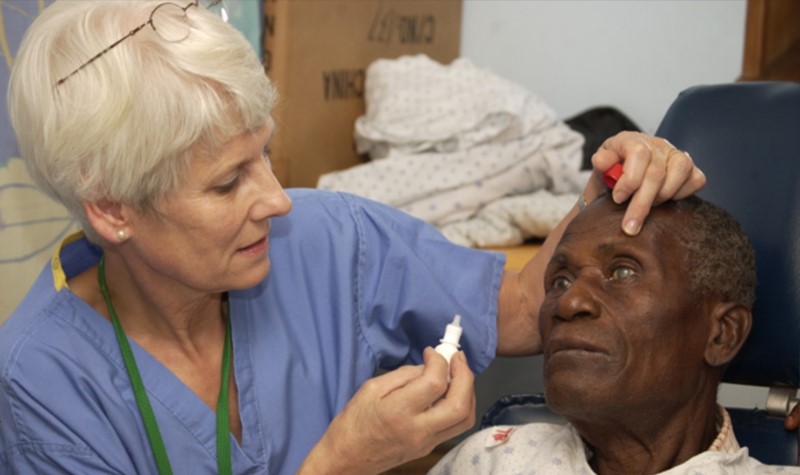 A grandmother of five who had a fear of public speaking is standing down from the lectern after raising £76,000 delivering more than 270 speeches about charity Mercy Ships.

Retired nurse Frances King, 76, – who worked at Fernbank Surgery, Lytham, for 20 years – has volunteered onboard the Africa Mercy three times, helping to deliver healthcare to the world’s poorest nations.

Here she became increasingly passionate about the work of Mercy Ships as she witnessed first-hand how lives were transformed through free surgery and care as she served as a nurse.

Frances, who lives in Wrea Green and had worked in the NHS for 48 years, first heard of the charity in the early 2000s from another speaker, and it inspired her to volunteer onboard and eventually become a speaker herself.

The mum of two, who has been married to her husband Michael for 54 years, said: ‘I was so inspired by this talk that I wanted to give something back as my career had given me such a good life.’

Frances, said: ‘My first time was to Ghana in 2006. I was so moved by what I saw, and the work being performed by all on board that I wanted to return again, and I did. Next time to Liberia in 2008 and finally to Togo in 2010, after which my nursing registration expired. Working on and off the ship I was quite overcome when seeing hundreds waiting to be seen in the heat on their feet for hours, they would sing and smile, never complaining waiting to be seen – not like here in the UK. It was like being part of a large family.’

In 2007, she was asked to do a speech about her experience onboard and the thought terrified her.  Frances said: ‘I was so scared of talking in front of people! Having never spoken in public in my life, I dreaded the thought when my local Mothers’ Union asked me to share my experiences. It was whilst we were in our caravan on holiday, that Michael persuaded me to do it and he helped in putting a presentation together one evening. I thought I would only do it once!’

But the impact of Frances’ talks was phenomenal, and the donations kept rolling in, so she agreed to do more. Only after 10 did she feel slightly more comfortable with public speaking.

Mercy Ships UK Chief Executive Officer Joanne Balaam said: ‘We are so incredibly grateful for the astounding effort and impact Frances has had on fundraising and spreading the word of Mercy Ships from her first-hand experiences. Every talk that Frances has given has inspired remarkable donations as she travelled over eight counties to deliver them.   Her talks have helped make a vital difference to countries in West and Central Africa through ensuring surgery to those who need it most and delivering ongoing training and expertise to local medics to guarantee a lasting legacy.’

In April, she will retire from the Mercy Ships’ speakers’ network after an incredible 273 presentations.

Mercy Ships Community Partnership Manager Christine Brown said: ‘If anyone knows of someone who could try to follow in Frances’ spectacular footsteps we would be extremely grateful. If you are an inspiring speaker, or perhaps like Frances you want to take on a new challenge for Mercy Ships, we would love to hear from you!’

To find out more about Mercy Ships visit www.mercyships.org.uk