Around thirty people including children had to be rescued from the historic Grand National ride at the Pleasure Beach in Blackpool today (Tuesday 1st June). The wooden, twin track classic racing roller coaster ride is one of the oldest on the attraction, being constructed in 1935.

Staff had to escort those on board, including a five-year-old boy, back down the steep track. A spokesperson for the Pleasure Beach said a ‘stoppage occurred on the lift hill’ of the ride and ‘all riders were safely escorted down’. The spokesperson added that the ride was checked and reopened just before 13:00. 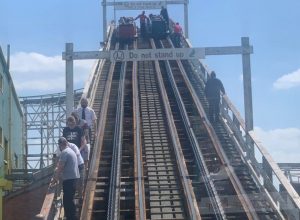 At about the same time, another rollercoaster at the same amusement park, the giant Big One, also suffered a temporary stoppage, but riders were able to remain seated and the ride continued five minutes later. One witness told Lancashire Live. ‘It looked like they were going to have to head all the way down like they did a couple of months back. Fortunately two staff climbed up, flicked something and got it going again.’

Boo hoo for Debenhams staff as all shops to CLOSE DOWN!

Have you seen Ashton?