The name ‘Worm Moon’ comes from Native American tribes because it originally referred to earthworms that would appear in the Spring as soil warmed. The Full Worm Moon invited birds to feed on the worms – and was considered to the beginning of Spring.  It is also known as the Lenten Moon, because in Christian tradition Easter falls on the first Sunday after the first Full Moon of Spring.

This year the Worm Moon is a Super Worm Moon because March’s Full Moon is also a Super Moon.

Here are all of the Full Moons and their names this year:

The wonderful featured photograph at the top of this article which depicts the Moon over the beach huts was taken by Stephen Cheatley and was featured in The Telegraph and The Sun newspapers in2019. 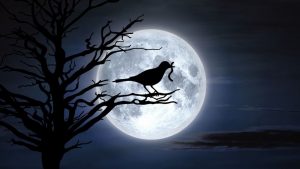 Would you “Walk the Woodie”?

Over 50s in Lytham St. Anne’s Told To Book A Jab While They Still Can

Massive Temporary Morgue At Warton Decommissioned as Covid-19 deaths fall to another low.

Have you seen this car?

Would you “Walk the Woodie”?