The Star Flyer on the Promenade in front of Blackpool Tower opened for the first time yesterday (Sunday 21st November). But dozens of passengers were left suspended in the air on a bitingly cold afternoon when the new ride came to a sudden stop shortly before 5 p.m. The huge swing, which costs £7 for a 5 minute spin, was out of operation for around 10 minutes after its power reportedly cut out mid-spin.

Riders were left perched on their seats around 40ft above street level before they were lowered safely to the ground when staff took control of the ride’s manual system.

Photographer Philip ‘Kermit’ Downie was taking pictures of the attraction at the time it broke down. He shared a Facebook live when he realised the ride was stuck in the air which went on for more than seven minutes as the ride was slowly lowered to the ground.  The featured photograph are stills from his shared Facebook live. You can see his full video here: https://www.facebook.com/alcapowned/videos/379937020543527

Today, a spokesman for the company, said: ‘The ride was not operational for a matter of minutes and fully open for around 9 hours on the day. All people were brought down safely by the rides manual system and exited the ride within a few minutes. This was a very minor issue in what was a fantastic day for Blackpool with many thousands of people coming and supporting the Star Flyer ride and wider Christmas offer in Blackpool.’

The Star Flyer came to Blackpool as the main attraction for the Winter Gardens Wonderland Festival. It is 210ft tall and almost half the height of Blackpool Tower. It was originally due to be located on St John’s Square but was moved to the Promenade. 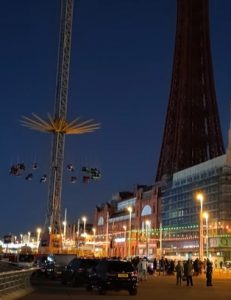 Are you having a school uniform clearout?