In a recent post on social media, Tory MP Brendan Clarke-Smith attempted to explain the Free School Meal Parcels after parents receiving them came together online to share their shockingly small parcels
The idea was that the parcels were for 10 days worth of school lunches worth £30. However, one mother valued her box at £5.22 if bought from Asda. The meals were supposedly supposed to be nutritious and filling to help children focus whilst learning from home.
Mr Clark-Smith wrote that the parcels photographed were supposed be for 5 days rather than 10, and only worth £10.50 (see below for his full post). He admitted that the parcels could be a bit better. He also shared an image of what parent should expect to find in their parcel. 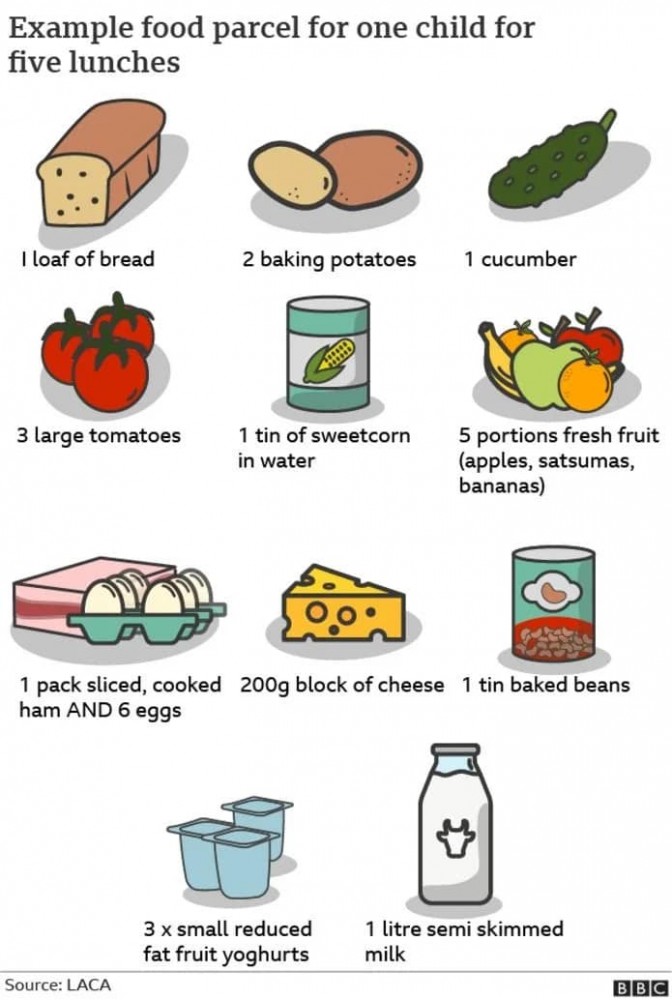 However, the public are sceptical as to whether is just a tactic to cover up the issue.
One outraged mother wrote: “Funny ’cause I got a text from the school to say its fortnightly I believe that adds up to ten days:

To support our pupils who usually receive free school meals whilst at school, we will be providing fortnightly food hampers which can be collected from school. Please complete the form by clicking on the following link by 2pm today to indicate whether you wish to receive your hamper or not and when you can pick it up. https://bit.ly/38lImky
“That’s what received then another to say it’s ready to be picked up what I got was shocking and random , I got two rotting apples and 4 rotting carrots 4 in the bag”
Despite Mr Clarke-Smith’s explanation that the food was worth £10.50 for 5 days, the mother who started all this shared her valuation of the food at £5.22 from a regular supermarket. Meaning that the company was still profiting £4.50, even if it was to last half the expected time.
One person made the point that there was no consideration or information for children with allergies. “How do you explain items being decanted and delivered with absolutely no allergen or nutritional information on them? This is incredibly dangerous and shows a complete disregard for the people you claim to be trying to help and lack of understanding of how modern families manage their food.

I’ve had a number of questions today about the parcels that have been going out for those who receive free school meals and aren’t able to take up this entitlement in school at the moment.

You may have seen photographs circulating on the internet showing a box of food that had been distributed by a contractor. It was claimed this had food in it that was meant to last ten days.

Basically, the food in the picture was actually only intended for 5 days, not 10, and cost £10.50 not £30 as has been suggested by some. The company responsible have however acknowledged that it could have been better.

The food is supposed to be a substitute for the lunch children would be missing in school – it’s not intended to be food for the whole day and it is not intended to feed the rest of the family either (there are however other schemes available for struggling families who need this as part of the Covid Winter Plan).

Schools get about £11.50 from the Government per week to provide school meals. Recognising the extra costs of distribution etc the Government has now increased this to £15 (the additional funding was announced on Friday). All this had to be done at very short notice last week.

Schools/Local Authorities can either use food parcels or they can use a national/local voucher scheme instead – they were given the choice and they still have a choice.

Schools/LAs then used their own contractors to distribute food. The pictures people saw are from one of those companies. These are not chosen by the Government.

The Government and LACA have set guidance as to what each food parcel should include and what people can expect to receive (pictured).

Parcels have been preferred by many as they also allow schools to keep in touch with some of the more vulnerable pupils from a contact perspective.

Schools cannot cook hot food and send it out as they do not have the relevant food safety certificates for this. This is why food is sent out that can be prepared at home and will last.

Finally, not just from a nutritional perspective, but an educational and health one, it is important that all children are able to return to school as soon as possible. That’s why following the rules, testing and vaccinations are so important.

In the meantime, thank you to all of our school, local authority and private sector staff who are helping to get us through these challenging times – and thank you to the parents who are staying at home as part of these efforts too.”

A Hot and Sunny Weekend In Store For Lytham St. Anne’s.

How to safely have sex during the pandemic

Boris Johnson attempts to support lonely single people, giving them the green light to form a ‘support bubble’ with another household