Dog walkers who allow their pets to foul all over the football pitch known as Fisher Field is Blackpool – the home of Foxhall Junior Football Club – have been given a stark message courtesy of the well-known double glazing contractor Misty To Clear (01253 311076). The message is –  ‘Want to start yoga –start by bending over and picking up your dog shit – known as the downward dog position’.  Ironically, in the photo below there is already a massive piece of dog poop in the foreground!

Before they can play each of their games the coaches who give up their time freely and the teams’ supporters have to clear the field of masses of dog dirt.  Stephen Nightingale posted lots of examples of the mess created just on one pitch on his Facebook page on Saturday 4th September. He also wrote this plea asking for support by signing a petition.

’You might be all aware Fisher Field is the home of Foxhall JFC and as we enter our 51st season we still have the continuing issues of dog poo, no young footballer should have the issues of dribbling a ball past a mountain of poo. The Foxhall coaches do what they can to keep the field clean and the club have done everything they can to prevent lazy dog owner, including putting 20 new signs on the field and having the local dog warden sit on the field at certain time, but sadly poogate is still happening.

Below is a link and the only avenue we have to get the field closed, it goes to vote every three years I believe to keep the field open or close it. This isn’t advertised by the council at all, but the more people that do the survey the better chance we have to have a clean field for the lads.’

Stephen Houghton supportively commented: ‘Every grassroots football manager knows the “dog shyte sweep” before you start a game. Every public playing field should have this sign up. Well done to the lads for putting the sign up.’ 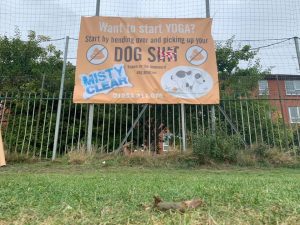 The Red Arrows Return To The Fylde Skies This Coming Weekend

The Mayor Of Fylde Officially Opens The Fairhaven Adventure Golf

It’s like a Winter Wonderland of giftware and decor!

The Red Arrows Return To The Fylde Skies This Coming Weekend