Lytham’s HM Coastguard volunteers were called out this morning (Saturday 29th May) at 1.56 a.m. to reports of a vulnerable person in the water around the North Pier area. They arrived on the scene and liaised with the police. The casualty was locating standing underneath the Pier. Two Inshore Lifeboats from RNLI Blackpool were placed in a position to prevent the casualty from putting themselves in any further danger. The crews from the lifeboats then began negotiations. Fortunately, they eventually managed to assist the casualty to the lifeboat and took the casualty back to shore who was then passed into the care of Blackpool Police and North West Ambulance. HM Coastguard Fleetwood were also tasked to assist. 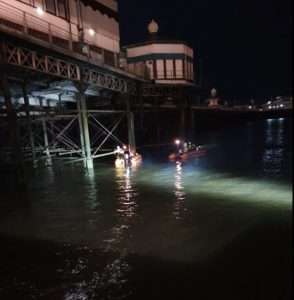 The tireless volunteers were then called out again around seven hours later. This second call out was this morning at 8.10 a.m. to reports of a person in the water around the Gynn Square area.  Lytham’s HM Coastguard volunteers arrived on scene and assisted getting the casualty back to shore, where they were handed into the care of Blackpool Police. RNLI Blackpool were also tasked and launched one lifeboat.

A tribute message, and special thanks from the family of the two boys who sadly drowned in St Annes this August

Can you help identify this lady?