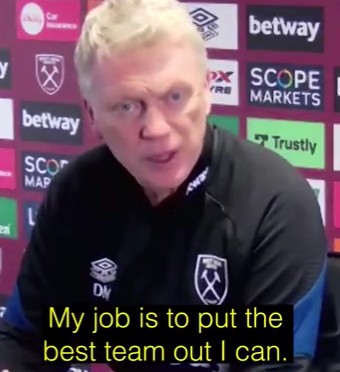 There has today been widespread criticism and withdrawal of sponsorship following West Ham’s manager, David Moyes’ decision to play cat-kicking Kurt Zouma in last night’s match against Watford. Frenchman Zouma has been widely condemned after the video, filmed by his brother, showed him dropping and kicking the cat at his home and hurling a shoe at the animal.

David Moyes, who resides in Lytham St. Anne’s said, ‘My job is to try and pick a team which gives me the best chance at West Ham and Kurt was part of that team. I was really disappointed with what I saw and what I was told. But overall my job was to get a win for West Ham, of course there are people who are disappointed with that and I understand that totally.’

During the match the player was booed, and today Vitality UK withdrew their sponsorship and many  slammed West Ham for playing Zouma,  including Gary Lineker who branded manager David Moyes’ selection as ‘tone deaf’.

As a response, the footballer, who is on £125,000 a week, has today been docked two weeks’ wages by his club. A spokesperson for West Ham said, ‘West Ham United can confirm that the club is supporting an RSPCA investigation into the actions of Kurt Zouma in the video circulated online this week. Kurt and the club are co-operating fully with the investigation and the player has willingly complied with the steps taken in the initial stage of the process, including delivering his family’s two cats to the RSPCA for assessment. Kurt is extremely remorseful and, like everyone at the club, fully understands the depth of feeling surrounding the incident and the need for action to be taken.

‘Separate to the RSPCA’s investigation and pending further sanction once the outcome of that process is determined, West Ham United can confirm that Kurt Zouma has been fined the maximum amount possible following his actions in the video that circulated. The player has immediately accepted the fine, which will be donated to animal welfare charities. West Ham United would like to reiterate our condemnation of Kurt’s actions and make it clear that the matter continues to be handled with the utmost seriousness.

However, we believe it is now important to allow the RSPCA to conduct their investigation in a fair and thorough manner, and will be making no further comment at this stage.’

The RSPCA have confirmed that the cats have today been confiscated. An RSPCA spokesperson confirmed: ‘We’re investigating and the cats are safe and in our care. We have been dealing with this since before the clip went viral online and we need to follow the proper legal process and not discuss due to UK GDPR laws.’