There has been a massive clear out of jobs at Radio Wave with all the presenters, except breakfast hosts Scott and Tatum, being made redundant.  This follows Bauer Media buying out fifty eight local radio licences last year, including Radio Wave 96.5 which has been broadcasting to the Fylde Coast since 1992.

Hayley Kay who has been presenting for fifteen years on the local station told the Blackpool Gazette it was the end of an era, ‘It was a privilege to spend 15 years of my working life there, almost 10 of those waking up the Fylde coast. I worked with so many talented people over the years and made friendships that I’ll cherish forever. I hope Radio Wave will be remembered as a brilliant, truly local station.’ Among the many also leaving are the very popular DJ Ian Shep Shepherd and well respected news editor Andy Mitchell who has been at the station since day one and who writes a regular column for the Blackpool Gazette.

Graham Bryce, group managing director at Hits Radio Network Brand, said, ‘I’d like to personally thank all the individuals for their professionalism and outstanding contribution. These changes in no way diminish those achievements but merely reflect the changing market in which we operate. We wish them the very best for the future.’

However, the great majority of comments on Radio Wave’s facebook page have not been favourable: Robert Elliott writing, ‘Can’t believe Radio Wave is going. I’m going to miss Radio Wave. I’ve grown up with them when I was a kid. RIP Radio Wave.’

Angela Davies said: ‘What a SAD day….. the demise of our fabulous radio station and our radio station family. Trying to silence our breakfast show duo by making them play FIVE-IN-A-ROW… when they love a chat !! Poor Scott & Tatum. All get together and form another station….. we want you back. All this OLD OLD stuff is plunging us back FIFTY YEARS ….. it’s DEPRESSING .’

Adele Dowling remarked: ‘Very sad. Radio Wave has been a great local station always supporting local people and charities. Yet again the big guys are taking over, but I for one won’t be listening. Who wants to listen to golden oldies all day every day?? Over and out 96.5’ 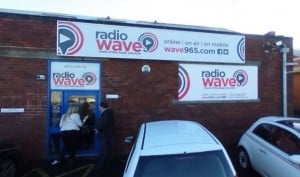 Angst for parents as school remain closed until September

A Chilly Weekend In Store For Lytham St. Anne’s – With The Possibility of Snow.

Man arrested on suspicion of MURDER of John McQueen